After a tense round of negotiations, G-20 nations on Saturday reached a compromise on climate change, the last remaining issue of contention at the summit. Every country except the United States declared that the Paris climate change agreement is ‘irreversible’ and must be implemented ‘swiftly.’ The U.S., on the other hand, declared its intention to pull out of the 2015 deal, which has won the backing of nearly 200 nations.

While leaders of 19 countries of the G20 group, including India, reaffirmed their faith in the ‘Paris Deal’, US did manage to get its position on fossil fuels inserted in the joint statement through a formulation promising more efforts for “clean and efficient” use without any commitment to its end.

The reference to fossil fuels should not cause any particular discomfort to India as it will continue to use coal for power even as it has declared that it will pursue cleaner technology and also ramp up its renewable energy capacity by 2030.

The divide between the United States and rest of the world on the Paris Agreement on climate change was further formalised on Saturday with the G20 declaration in Hamburg taking note of the US intent to withdraw from the global deal.

The statement and the adoption of the G20 Climate and Energy Action Plan for Growth ended three days of intense negotiations over how to characterize the world’s response to Mr. Trump’s decision to pull out of the Paris climate agreement, and it came as this year’s meeting of major world economies here laid bare the stark divide between the United States and the rest. 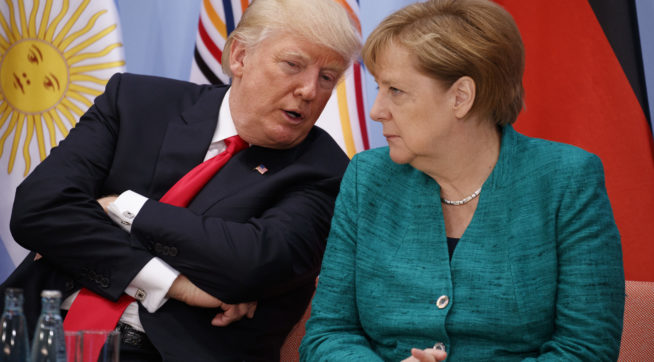 US President Donald Trump’s position on climate change was termed “regrettable” by German Chancellor Angela Merkel in her closing remarks at the G20 summit but world leaders appeared to have struck a deal on trade policies.

The U.S. has been an outsider on climate change at international talks since Trump took office.On June 1, Trump announced that the U.S. would be pulling out of the accord.

“The United States will withdraw from the Paris Climate Accord, but begin negotiations to re-enter either the Paris Accord or really an entirely new transaction on terms that are fair to the United States,” Trump said. “So we are getting out, but we are starting to negotiate and we’ll see if we can make a deal that’s fair.”

He added that the nonbinding portions of the agreement would cease to be enforced by the U.S.

As President Trump mulled pulling the U.S. out of the Paris Agreement on climate change earlier this year, supporters of bold policies to address global warming around the world feared that the U.S. withdrawal would hinder action on the issue.

But on Saturday, with the exception of Trump, the leaders of the world’s largest economies gathered at the G20 reaffirmed their commitment to fostering clean energy development and implementing the Paris Agreement on climate change.

The divide over climate change and the sharp differences, particularly between Trump and west European leaders, were clearly evident. “Disagreement has to be made clear. Unfortunately, and I deplore this, the US left the climate agreement,” noted German Chancellor Angela Merkel. French President Emmanuel Macron said, “Our world has never been so divided.”

However, the G20 managed a compromise on trade where Trump’s protectionist sentiment and call for free trade was accommodated. The G20 recognised the “importance of reciprocal and mutually advantageous trade and investment” but also took on board concerns over trade imbalances by noting the role of legitimate trade defence instruments to combat unfair practices.

At the May G-7 meeting in Italy, the U.S. declined to join other countries in backing the Paris deal, saying it was in the process of reviewing its policies. After Trump’s June announcement that he intends to withdraw from the Paris agreement, the U.S. position was relegated to a footnote in a joint statement released after a G-7 environment ministers meeting in Germany last month.

Projections suggest climate change impacts within the next 100 years, if not sooner, the world’s glaciers will have disappeared, as will the Polar ice cap, and the huge Antarctic ice shelf, Greenland may be green again, and snow will have become a rare phenomenon at what are now the world’s most popular ski resorts.

Average sea level around the world rose about 8 inches (20 cm) in the past 100 years, climate scientists expect it to rise more and more rapidly in the next 100 years as part of climate change impacts.

The  amount of water in the atmosphere and will increase producing violent downpours instead of steady showers when it does rain,increasing the number of major storms and floods.The string of record high temperature years and the record number of global droughts of the past decade and  prolonged heatwaves will become a common norm.

One of the most striking impacts of rising temperatures is felt in global agriculture ,although these impacts are felt very differently in the largely temperate developed world and in the more tropical developing world.Different crops grow best at quite specific temperatures and when those temperatures change, their productivity changes significantly.

The productivity of rice, the staple food of more than one third of the world’s population, declines 10% with every 1⁰ C increase in temperature.At the same time, global population models suggest that developing world will add 3 billion people by 2050 and that developing world food producers must double staple food crop production by then simply to maintain current levels of food consumption.

Rising temperatures favour agricultural pests, diseases and disease vectors.In Southeast Asia, for example, where malaria had been reduced to a wet season only disease in most areas, it is again endemic almost everywhere year around.

Likewise, dengue fever, once largely confined to tropical areas, has become endemic to the entire region.Increased temperatures also increase the reproduction rates of microbes and insects, speeding up the rate at which they develop resistance to control measures and drugs.

Rising temperature and rising CO2 levels are making the seawater  more acidic and damaging  the ability of sea creatures to make shells. Shelled species, tiny and large, are the base of the ocean food pyramid and their loss threatens the food producing potential of the oceans.

Green activists and global thinktanks on climate and clean energy issue saw the outcome differently, terming it a victory of the rest of the world with the “isolation” of US President Donald Trump.

Ahead of the June announcement, world leaders and even Pope Francis had implored Trump to remain a party to the Paris accord at the G-7 Summit in May.